The following books feature Rim Chung, his RS2 fly patter, or variations on the RS2 fly.  Rim, being extremely modest, doesn’t really enjoy any form of self-recognition, but as they say, “imitation is the greatest form of flattery.”

Small Fly Adventures in the West by Neale Streeks

A Fly fisher’s guide to the South Platte River 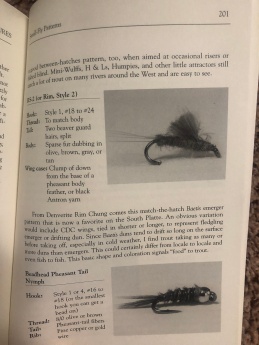 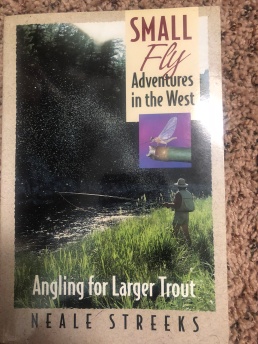 by Pat Dorsey is a complete how-to fly-fishing manual for the entire South Platte River drainage. This book represents decades of experience from the top guide on this demanding river, and encompasses a thorough look at each section of the river. In addition Pat gives details on the hatches and recommends fly patters for each season of the year. There are 160 plus color photographs and 30 illustrations that support the text. 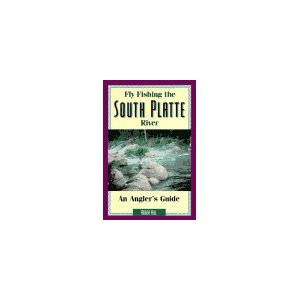 Now out-of-print, but this was the original book on the South Platte River.  Roger Hill’s version of the RS2 was the original copy of Rim Chung’s RS2 and was the version typically found among Front Range fly shops for most of the last 30 years.

Publication Date: June 29, 2010.  New flies and old standbys from one of Umpqua Feather Merchant’s top-selling fly designers with 500 step-by-step photos of 24 proven patterns for the most demanding trout

Patterns for streams across the country, not just tailwaters; 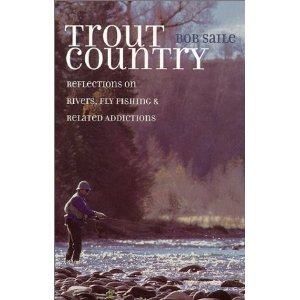 Aside from the Brassie, the most important contribution to the fly boxes of American anglers to come from South Platte lore is the RS-2 —an all-purpose nymph pattern that, depending on size, can resemble the aquatic stages of a midge, a mayfly, or even a caddis.  RS-2 stands for “Rim’s Semblance, Style 2.”  It was born in the tying vice of Rim Chung of Denver, a self-taught fly fisherman who began as a frustrated spin-fisherman.

When Chung came to Colorado from Seoul, South Korea, in 1968, he had a strong desire to catch Colorado trout but only the weakest clues on how to go about it.  He began to fish with spinning tackle but rarely caught anything when he encountered the selective trout of the Platte and other waters.  Two years later, he was ready to give up.  Then a friend suggested he take up fly-fishing.  “What the hell is fly-fishing?” Chung asked his friend.  Chung then began to fish with dry flies, but it was still frustratingly unproductive or, at best, inconsistent.  Finally he met someone who offered to take him nymph fishing.  “What the hell is nymph fishing?” Chung asked.

His progression to becoming a successful trout fisherman was fairly swift after that.  Chung developed his nymphing skills and learned to tie flies.  He decided to try to develop a nymph pattern that was a general suggestion—a semblance—of almost any hatching aquatic insect, depending on size.  What emerged was a pattern that is constructed with a Tiemco 101 hook that has a straight eye, in sizes as big as 14 and as small as 24.  Two strands of microfibers or beaver guard hairs constitute a widely split tail.  The body, or abdomen, is slenderly dubbed beaver fur, either natural gray, or dyed black, olive, or some other color.  A thicker thorax section is also dubbed beaver fur.  The almost directly upright short wing is tied between the thorax and the abdomen on the top side and consists of a clump of gray, webbed saddle hackle fibers, or CDC material, trimmed with scissors into a triangular shape.

Today, the fame of the RS-2 has spread far beyond the South Platte, but it stands as testimony to the ingenuity of the anglers who honed their skills on its challenging currents.

These are the stories of 34 fly tyers in over 300 pages, perhaps the greatest in the world, including legendary anglers, professional tyers, fly-fishing guides, and writers.  The book focuses on the featured tyers, but it also details, with recipes and color photos, 68 of their favorite fly patterns. Colorado Trout Flies presents a unique and invaluable reference from veteran fly-fishing guide, Todd Hosman who lives near Longmont, Colorado. He is also the author of Fly Fishing Rocky Mountain National Park and Fly Fishing Colorado’s Front Range.

A.K. Best comments on the Colorado Trout Flies  by saying, “Todd Hosman has written a fly tying book like no other. I know some of you may find that hard to believe, but it’s true. Colorado Trout Flies reads like a who’s who of noted Colorado fly tyers and some of the patterns they are known for. But more important, the book contains a short biographical sketch of each tyer that gives the reader some insight on what drove them to create flies that have become local and national standards. Colorado Trout Flies is destined to become a classic not only because of the reasons mentioned above, but also because the fly patterns will fool trout anyplace.”

John Gierach says, “One of my favorite things about this book is that I’m in it, even though I don’t tie professionally and never invented a fly pattern. All I’ve ever done is tinker with flies as I tied them for my own use, now and then coming up with minor changes that either made an existing pattern slightly better or at least didn’t do any real harm. At least at the amateur level, fly tying is like folk music: The songs may be the same, but every banjo picker adds his own licks. That’s why I appreciate Todd’s biographical approach and what I’ll call his sensitivity to the subject (for lack of a better term). A lazier writer would have run through a standard questionnaire with each tyer, filling in the bare facts and quite possibly missing the point. But Todd was smart enough to start fresh each time, asking the single, not so simple question: Who are these people? There’s also a loose thread of community running through the book, although Todd has the good taste notto make more of it than there is. It’s just that some of us who tie flies in Colorado are good friends who have fished together for years, while others are passing acquaintances or are known only by reputation. Some of us have bumped into each other over the years, usually at fly shops, and have made either lasting or fleeting impressions. Flies aren’t tied in a vacuum. There’s a nearly invisible web of cross-pollination that most of us are only vaguely aware of. When I get a new fishing guide-book, I’ll usually look up the rivers I’m familiar with to see of the author got it right, and that’s what I did with Colorado Trout Flies. I read the sections on the tyers I know – some well, others more casually – and Todd invariably nailed them. You don’t just learn about where they came from and how they got into fly tying, you also get a sense of their style, philosophy and humor and of their lives before or outside fly fishing. The conceit in outdoor writing has always been that fishermen are all pretty much the same. The truth is, we’re all pretty much different.”

Rim Chung is featured in the book, as is his RS2 and Plebby.  Originally priced at $69.95, but now available for a lot less, this book is a must have for any serious fly tier or fly fisherman.

The book made me realize how many of my fly fishing friends and acquaintances are truly famous or those that should  be, including Mary Bartholowmew, A.K. Best, John Betts, Jim Cannon, Rim Chung, Charlie Craven, Pat Dorsey, Ed Engle, John Gierach, Ken Iwasama, Shane Stalcup, Rick Takahashi, Gordon Wickstrom, and Coloradoans Mike Bilo, Mike Bostwick, Barry Conyers, Gary Dewey, John Hagen, and a host of my other fishing friends and fly tiers made along the sporting road. 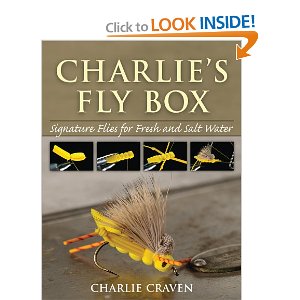 GUIDE FLIES: HOW TO TIE AND FISH THE KILLER FLIES FROM AMERICA’S GREATEST GUIDES AND SHOPS
Dave Klausmeyer 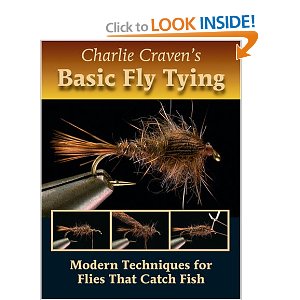 FLY FISHING THE SEASONS IN COLORADO:  AN ESSENTIAL GUIDE FOR FISHING THROUGH THE WINTER, SPRING, SUMMER, AND FALL 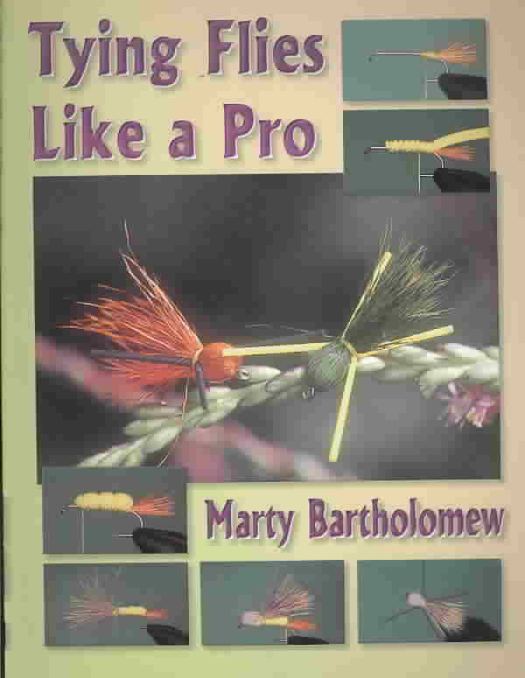 Guide Flies: How to Tie and Fish the Killer Flies from America’s Greatest Guides and Fly Shops Hardcover – November 1, 2003 by David Klausmeyer 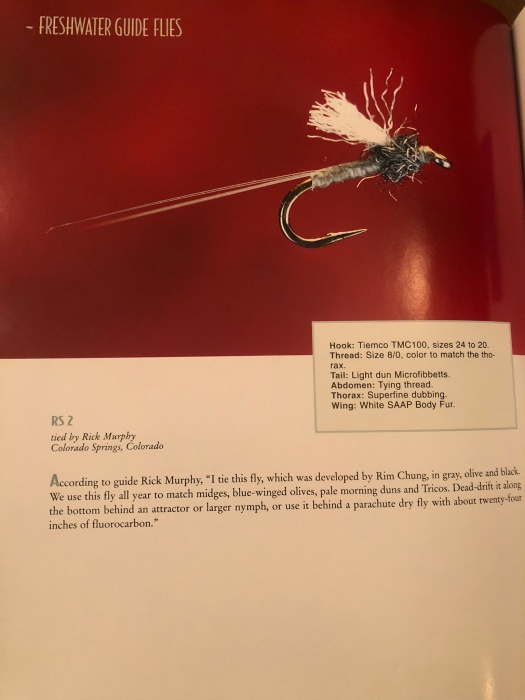 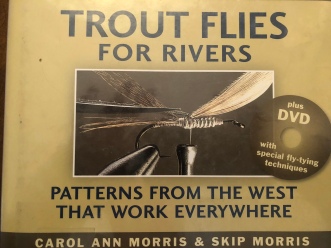 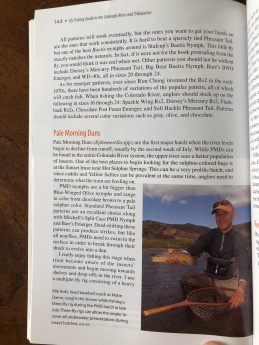 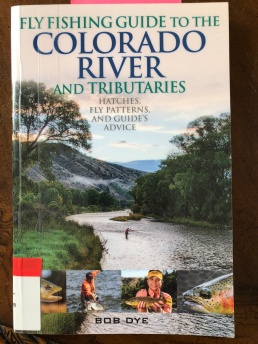 On the Fly: Letting it fly in the winter