Finding head cement for small flies, size 18-26, sometimes even down to 32, like we use for the RS2 has been easy for the past two decades.  You just went to any fly shop and pick up a bottle of Grif’s Thin Head Cement, and you are good until it runs out.  Sadly, Grif’s has been discontinued.

Being no nonsense and frugal, Rim turned to the hardware store and got some clear varnish and varnish thinner.  He is very happy with the results.  This is what commercial tyers such as A.K. Best have also recommended in print for many decades.

To me, Rim’s return to lacquer based head cement though seemed a return to Dave’s, which I used in my commercial fly tying days thirty years ago, and which I was never very happy with, as it was often getting too thick and drying up, as Grif’s Thin was a drastic improvement from Dave’s, as you never needed to add thinner.  Before Grif’s, the mainstay of the fly shops and many commercial Tyler friends was Dave’s Fleximent and Dave’s Fleximent thinner.  It would often dry up or get all gooey after a while, and near weekly adding of the thinner was a messy ordeal. So I turned to the Internet for a better replacement than a return to lacquer. 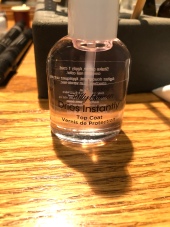 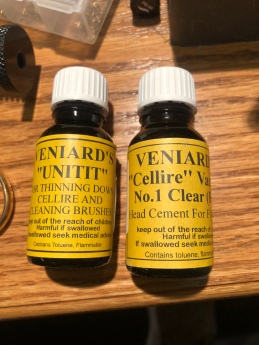 It seems head cement is a more complicated subject than I thought.  There are web sites devoted to an analysis of the different options.  For the best one, see:

I’ll skip to the punchline and save you the analysis—I have since gone on a head cement experimenting mission and have discovered a lot.  I have found that Sally Hansen Hard as Nails clear nail polish mixed with 100% acetone to thin it out right at the beginning, is as close to Grif’s Thin as possible, or Veniard’s is even better but not commonly available in the U.S.  I diluted Sally’s with “100% acetone as the thinner” (1/3 thinner to 2/3 Sally’s) and it is very close to Griffin’s Thin Head Cement.  Veniard’s straight is perfect but I bought their thinner for later, if needed.

Sally Hansen’s Hard as Nails polish or Clear Topcoat  – This is a very popular head cement, er polish, among the Catskill dry fly crowd. Many notable tyers use it, Dick Talleur being one of them. Oh, and it comes in cool colors to…imagine that! Funny how they market one bottle in a very lady-like feminine manner and right next to that display are these bottles that have a more masculine appeal…read “Hard…Nails”. Somebody at Sally Hansen did their research to broaden their market it would appear. Smart, very smart!

No luck with Loon Hard Head and zap a gap, too thick.  Any head cement is going to thicken, in time, and become unusable.  Those that use highly volatile drying agents, such as Sally Hanson’s or Loon, with dry out sooner.  To combat that problem, as well as the harsh fumes, many have turned to products such as TroutHunter Harrop Superior Head Cement, Orvis non-toxic, or Fly-Tite head cement.  These are water based and use alcohol as the drying agent, and seems to hold up well, both in use and in the bottle. They are also very thin, which is important for small flies.  They penetrate well.  However, they don’t seem to hold up as well as Grif’s after several fish mangle your fly.

Veniard’s Cellire Varnish is also a perfect choice, but is not widely available in the U.S.  Backcountry Laboratories Hard as Hull is the stuff that Lefty Kref includes in his “Eventuality Kit,” and I also find it acceptable in consistency, but a little too thin.  We will see how all of these hold up over time.

Probably also one of the best of these off-brands in the US, which are popular in Europe, at least of those I tried this year is Fritz von Schlegell – Head Cement – Dr. Logik writes, “Very thin head cement. Smell test indicates it’s probably a lacquer-based head cement but I can’t be sure. This cement really soaks into threads well. It has a very unique and patented built-in retractable brush/applicator. As I recall, the late Poul Jorgensen recommended this head cement in one of his books.”  It’s good stuff.

To prolong the life of your head cement, though whatever brand you decide to go with, be sure to cover the bottle between uses.  Also, you might consider using a dispenser bottle such as this, but I use a foam bottle tray that works fine, adjusting it for the bottle sizes by welding something in with the smaller bottles: